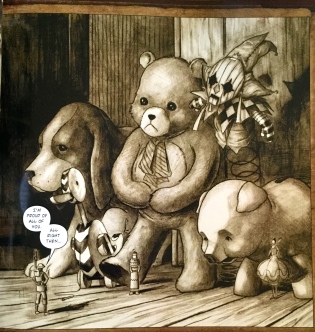 The Stuff of Legend

In 2009, three very creative guys got together and wrote the narrative for a fantastical child adventure. Set in the 1940s, The Stuff of Legend is tale of friendship and bravery. The Boogieman really does exist, and he uses closets and shadows underneath beds to capture his victims; victims who are never heard from again. One such victim is ‘the boy,’ who is taken by the boogieman into the world of shadowy dark. This is not a simple story about a little lost child, but rather the heroic adventure of the child’s loyal toys in their pursuit to find him and rescue him. In their quest to get ‘the boy’ back, seven toys and a faithful family dog enter the world of the boogieman, bonded in affection and displaying a fierce sense of duty to one another. It’s an epic adventure. What happens when older toys resent newer models? Are they willing to help? Can they be trusted? And, seriously how much help is a ballerina, a stuffed teddy bear, or a Jack-in-the-box? The Stuff of Legends is a dark, twisty tale of bravery and betrayal. Now in its fifth volume, The Stuff of Legend was picked up by Disney for film adaption.

Cool Factor: These toys turn into their real life counterparts once in the Boogieman’s world.