I’ve had the privilege of attending several cons in my day; from C2E2, Wizard World Philly (back when it was good), to New York Comic Con and Baltimore. Based on my experience, not all cons are the same, so here’s my take. 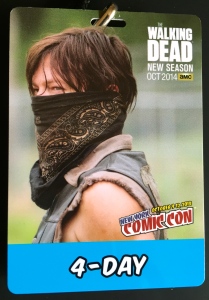 New York Comic Con – If you are interested in large scale, tons of pop culture, celebrities (old & new), and don’t mind lines that sore feet, New York Comic Con is your bag, baby. From rare con exclusives to big name announcement, and celebrities galore, New York has grown so large it’s crowds dwarf San Diego. Getting tickets is difficult, but worth it for the number of events, swag, and sheer comic fandom to be had. In 2014, it was rumored that 150,000 people per day entered the doors of the Jarvis Center for New York Comic Con.

C2E2 – Let’s say you want something a little less hectic, 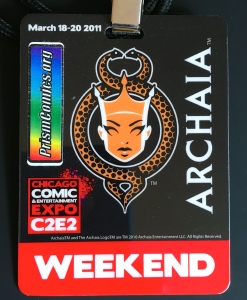 marginally smaller, but not small?  Then, C2E2 is for you. There are huge crowds, but not so daunting as to impede your con enjoyment. C2E2 is a spring con that hosts a number of comic and pop culture flare, a little bit of something for everyone. There are even big name celebrities, though not as may as… say… New York. 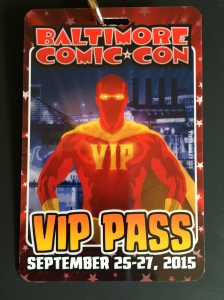 Baltimore – If you are a true comic book fan, looking for a comic con that really means, “comic readers con,” then Baltimore is the show for you (and me). The focus at Baltimore is comic books and comic book fans. While walking the floor of the show I overheard a self-publisher say, “This is a great con for creator-owned works. I’ve sold more books at this con than any other.” In my opinion, he was likely telling the truth. The draw of Baltimore is the pure focus on comics and the people who like to read comic books. It’s also good ground for those willing to try new things (new reads, new characters, the unknown). While the “big two” publishers may not appear at the con, the smaller presses have a field day. Additionally, Baltimore’s VIP pass is the only ticket in the field that actually gets the passholder early admission. Most VIP tickets mention something about “first access” to the con, but this is smoke and mirrors.  For other cons, “first access” is simply a ploy, as convention organizers don’t actually mean early admission.  They mean that… maybe… the first spots in line (if you get there first) at the door before opening might be available and open for you to stand and wait like everyone else, granting just a few moments more to the holder, before swarms teem in at your heels. 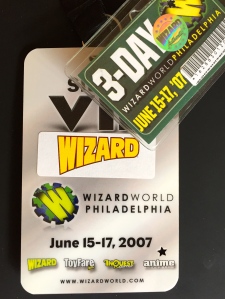 Wizard World Comic Con Philly – Interested in a mix bag of celebrities, sci-fi, wrestling figures, and comics? Any of the Wizard World cons is just for you. A-listers, B-listers and some of those in-between appear at Wizard cons. A draw for some has been Wizard’s ongoing agreement with Image Comics, allowing the continuous re-issuing of The Walking Dead Issue 1. Each Wizard World con has a new variant cover of the hugely popular comic book series. I haven’t attended a Wizard con since 2007, so I can’t say with assurance that this is still true. However, there have been fewer and fewer top-notch comic book guests and more pop culture guest appearing at these cons. Wizard cons aren’t overly expensive and have many locations thus making it still a good draw.

I’ve still some cons on my comic con buckets list: Emerald City Comic, Toronto Fan Expo, and perhaps–if I’m willing to take out a second mortgage on my home, give up my aversion to crowds–San Diego Comic Con. I’ve been hearing good things about Dragon Con, that may be in my future as well. We will see.